I’m actually quite happy with the story. True, there were difficult parts, but on the whole, I like how it turned out.

The interesting thing is that it has led to the promise of a massive amount of world-building. This is something I haven’t seriously done in far too long. World-building is something I have done on and off for decades. It usually began with a map – yes, a literal map, drawn with pencil and paper, full of a completely fictious landscape and littered with invented names. Then these names would be turned into descriptions of the peoples, the cultures, the languages, the history, the religion, the magic… all sorts of things. It was one such world that formed the setting for my ’09 NaNoWriMo effort.

Now I’m building a new world. This one hasn’t started with a map, at least not on paper. But that’s being rectified.

Making your own map

Why would you ever start a story without knowing where it’s going to end? Isn’t that like getting in your car for a drive and just choosing turns that look interesting? It’s possible to get quite a long way and see many interesting things, but sooner or later you’re going to get stuck. Or lost. And you may well find yourself miles from home come nightfall. Perhaps you can just turn around and see if you can find your way back home. You’ve just gone basically nowhere.

And a story that goes nowhere is not a story. 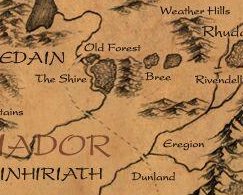 END_OF_DOCUMENT_TOKEN_TO_BE_REPLACED

Tagged as belgariad, lord of the rings, planning, writing

The Madness Of The Writer

I have saying I use from time-to-time. I’m not quite sure where it came from, but I’ve used it for years: I don’t suffer from madness, I enjoy every moment. A therapist I knew briefly some years ago found it hilarious, which was slightly scary.

END_OF_DOCUMENT_TOKEN_TO_BE_REPLACED

I’ve known for a while that writing is not merely sitting at a keyboard (or with pen and paper) and just spewing words out, despite what NaNoWriMo encourages its participants to do. Big or little, ideas need a place not just to germinate but to also sprout, grow and bear unexpected fruit. I know of several writers who carry notebooks of one sort or another just for scribbling down ideas and idea fragments wherever and whenever they happen to strike. Consider this another tool in your toolbox.

END_OF_DOCUMENT_TOKEN_TO_BE_REPLACED

A Writer’s Toolbox, Part One.

Every skilled worker has a toolbox, be they electrician, car mechanic or programmer. You’ve undoubtedly seen a tradesman lug a grubby, heavy box with them to a job. Inside will be a mystifying array of items, many clearly well-used, some you might even recognise, like screwdrivers of various sizes.

But did you know there is a huge array available of even common tools?